What are SDGs and What Can You Do About Them?

How any person, company or industry can - and has to - make positive world impact

In 2015, in an effort to bring the world together to solve humanity’s biggest challenges, the UN adopted 17 Sustainable Development Goals (SDGs). SDGs focus on protection of our planet’s resources, achieving peaceful partnerships between countries, economic stability and prosperity, and human equality with opportunities to thrive for everyone. SDGs have a goal year of reaching them by 2030. Courageous, isn’t it?

If helping our future generations survive on this planet isn’t enough reason to tie SDGs to your company’s strategy, the fact is: Your business will not succeed in the future if you ignore them.

Have you ever heard of The Turkey Fallacy, from the book The Black Swan by Nassim Taleb? The Turkey Fallacy goes like this. Turkeys think life is grand until the day before Thanksgiving. The happy-go-lucky Turkey realizes his fate, too late to have prevented it.

The Turkey Fallacy helps us understand the path we’re on with our planet. We’re in the “fattening of the turkey” phase, and one day, if we aren’t smart, we’ll wake up and it’ll be too late to do anything about it.

Business may be great right now, relying on the resources you’ve grown to take for granted. But when those resources have changed and you can no longer rely upon abundance, when the market itself has changed, where will that leave you? Not on the dinner table about to be eaten, we hope.

What are the SDGs?

As you read over the SDGs2, take note which ones your mind or heart connects with. Think of yourself and your company from your future self. Which initiatives do you envision you’ll be able to look back and say you were part of helping solve?

Mapping your personal and company goals to at least one SDG isn’t just something nice to do. It’s a necessity for the future of your business, for many reasons, including:

SDGs in a nutshell 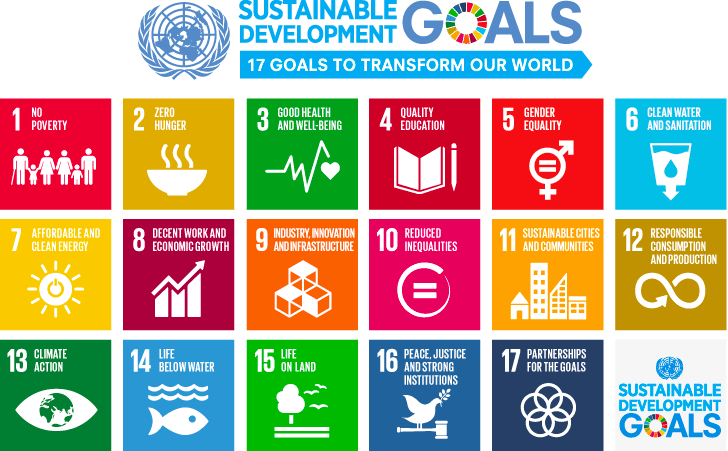 SDGs can also be visualized in groups of economy, society, and biosphere. 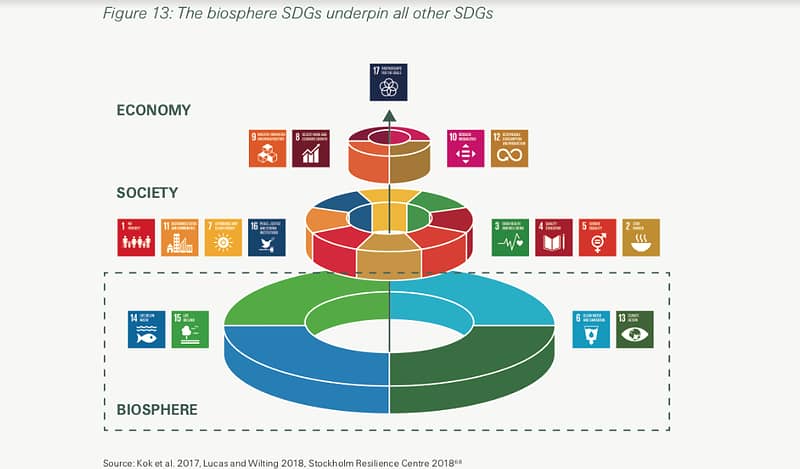 Anyone can see the world has a lot of work to do. But in order to do this work, there needs to be a major shift in the mental models by which we currently live life and do business.

In the model below, you can see where Corporate Social Responsibility (CSR) lies, in the triangle at the intersection of Business, Environment, and Society. See how tiny it is? 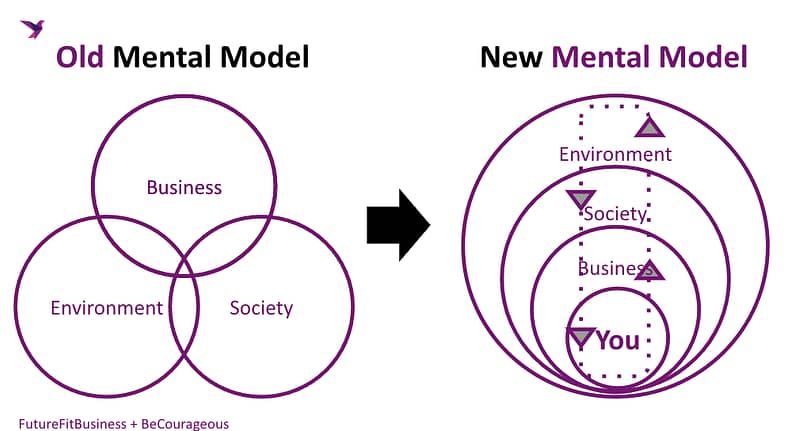 In the new model to the right, the dotted arrows all affect each other. No element is in an isolated environment. Nothing is outside the whole system.

Challenge your thinking and make a shift from:

Examples of companies aligned with SDGs

What if you were an SDG-first company, delivering value through your products/services, what would it look like?
Here are some examples.

Futurist Steve Sammartino has remarked on the company Patagonia, that they aren’t just a clothing company concerned about the environment, but an environmental company that uses clothing as their path to purpose. Their company belief of, “Everything we make has an impact on the planet,” has led to alignment and movement on numerous SDGs where the public can actively track their progress.

Partnerships such as Google for Nonprofits, Google Maps and charity: water have connected 60,000 people in need of clean water so far. Water donors are sent GPS coordinates and photos where they can track their water donation and feel the positive impact.

Microsoft’s move to make itself not only Carbon Neutral going forward, but to account for all of its legacy carbon, and make it’s past net carbon neutral, is a great example of the thinking needed.

H&M Group also has its eye on reducing its water use in manufacturing of their products, not only taking responsibility for its use of natural resources, but working on bold new ways to continue business when water is no longer freely available.

When Henry Ford realized that in order for people to afford his cars, they needed to be paid enough to afford them, he set about raising the wages of his workforce. Before SDGs were an official thing, he understood the economic opportunity of solving SDG 8 – decent work and economic growth. And by doing so, he created a market for his product. This may seem like a strange example now, in a time the world is struggling with the impact of emissions from burning fossil fuels, but it illustrates the need to be explore unintended consequences as you build the world you want to live into.

Why your business needs to be tied to SDG goals

Beyond the need to leave a healthy planet to future generations, businesses and the economy are also in the greatest challenge of our times.

If you are H&M Group, for example, and there is a shortfall of water available for manufacturing, and the price of said water goes up, your competitive position will go down against other clothing companies who worked SDGs into their strategy to become Antifragile to this inevitable future.

If you’re a pharmaceutical company, and biodiversity is down 70%, and many of your medication discoveries are based on from nature, your business will suffer.

The purpose of any business is to create value. And now, it is time to align value with positive impact.

How to align your business with SDGs

The first step to aligning your business with SDGs is recognizing the inevitability that unsolved SDGs are an existential threat to your business, our communities, and all life. For many companies, this may take a fundamental shift in why they exist, and what this means for the organization.

So, as a company, if you look across your value chain (many are starting to do this with their supply chains) ask these questions.

If you are to survive and thrive, the last of these must outweigh the others.

This will take strategic thinking, intention, and action. It will also take courageous leadership,
and a willingness to bring the conversation to the forefront, where it belongs.

The world proved during COVID-19, that the entirety of humanity is capable of enormous cultural change.

Beware of “SDG Washing.” Like “Greenwashing,” SDG Washing is when companies claim to be SDG-conscious, but their actions say otherwise.

The world doesn’t need any more charlatans or bravado, it needs action. The type of action that is taken step-by-thoughtful-step, by the courageous, who will inevitably face the slings and arrows of critics, but who know they’re doing what it takes. Action which may never be lauded for the trees they plant for others to sit in the shade of in the future.

“It always seems impossible, until it is done.”
– Nelson Mandela

We can help you find your Courageous Future. Let’s create a better world. Together. Map your company strategy to the SDGs that affect your business – and you can make the most impact on, with our SDG Strategy Tool.
Download

It Takes as Long as It Takes Most of us agree that we are really only at the tip of a massive amount of change. The 2020s will be the decade of challenge for the globe.

Most of us agree that we are really only at the tip of a massive amount of change. The 2020s will be the decade of challenge for the globe.

Courage, delivered to your inbox.

Sign up to our monthly newsletter “The Bridge” and receive inspiration and practical tools to courage your future.

0 M
What does this mean?